Get your copy on Amazon!

Cut Up Girl: Lawless Book One

Valentine Summers is famous for all the wrong reasons. Her secret identity as the superhero known as Cut Up Girl has been exposed. Worse, embarrassing photographs taken by a former partner have leaked to the media and she’s become fodder for tabloids and a punchline for late night comedians. It doesn’t help that she has a rotten superpower, the ability to create a perfect clone of herself by cutting off a limb. Her limbs do grow back instantly, but her clones are unstable and their brief lives end with messy explosions. She’d be perfectly happy to put her life as a crimefighter behind her, but it’s difficult to find a job once the world discovers you’re a scandal-plagued former vigilante. Just when it seems her life can’t get any worse, the most dangerous supervillain she ever put in prison escapes. Now she must suit up one last time to save Port City from a time-travelling Victorian scientist and his army of enhanced apes. Can Cut Up Girl and her exploding clones save the city, rescue her reputation, and be seen as a hero once more? Probably not! But at least she can blow up bad guys with her exploding clones until she feels a little better.

LAWLESS is a new series set in a world where the greatest superheroes on the planet have banded together as the Lawful Legion! Golden Victory! She-Devil! Atomahawk! Smash Lass! These living legends have saved the world a dozen times over! This is not their story. Instead, LAWLESS will feature heroes who didn’t qualify to join the A-list heroes. Heroes whose powers are weird or useless, or people with great powers who don’t necessarily have the courage or a compelling motive to serve mankind. Some people who gain superstrength use it to fight crime, others cash in by moving furniture. Forever living in the shadows of the Lawful Legion, can these rogue superhumans hope to find a path to become heroes? 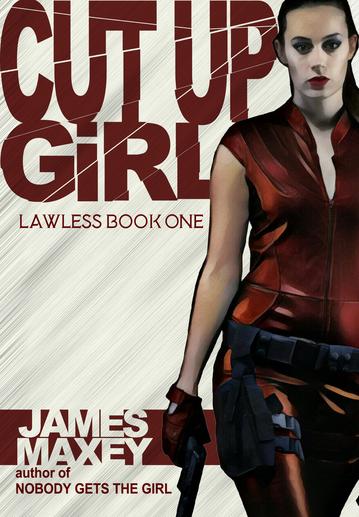